See the video of this new 3.0 model for sale in the video below:

Lie Detector Lantern in use on Stage with a volunteer: 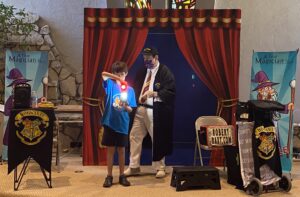 A 23 page .pdf file is included on the DVD that has jokes, lines, questions, bits, & suggestions for every occasion. Routines for adults, family shows, weddings, roasts, business and corporate events, and many more situations! It has a range of over 40 feet, but most people use the remote on the back of a clipboard (not included) that has the questions so you can just read the lines and get lots of laughs and fun! An offstage or in the audience secret assistant can also remotely control the lantern so the performer is completely clean! Packs small but plays BIG! Just under 8 inches high when collapsed and under 11 inches high when fully opened.

OUTSIDE THE UNITED STATES: Price $245.95 Includes Priority AIRMAIL Shipping To ANYWHERE IN THE WORLD TO GET TO CUSTOMS IN 10 BUSINESS DAYS! (BUT! Order Select Other Items and get combined shipping for less! Email robert@robertbaxt.com with your full list to find out shipping).

* LESS EXPENSIVE VERSION: Non-Remote controlled! Make your own device with

The lie detector is a classic comedy premise that can now be done by anyone, singlehandedly, with the supplied gimmick that’s EXTRA LOUD for EXTRA LAUGHS! Robert shows ON THIS DVD how to easily and inexpensively MAKE this battery operated GIMMICK into a Security Metal Detector along with over half a dozen examples of various other lie detector props you can READILY CREATE. But YOU CAN USE IT TO MAKE ANYTHING INTO A LIE DETECTOR OR USE IT BY ITSELF!

This non-remote controlled battery operated device repeatedly buzzes when a lie is told. A secret switch does it all. The crowd goes wild as the lies go on and on! The potential for fun and excitement with Baxt’s LIAR • The Ultimate Comedy Lie Detector Routine is endless! Have a spectator come on stage and ask him if he likes his boss. “BZZZZZZZZ!” Ask if he loves his wife. “BZZZZZZZZ!” Ask him if his boss loves his wife! This time it does NOT go BZZZZZZZZ! Laughs galore! Use it as a running gag throughout your show. 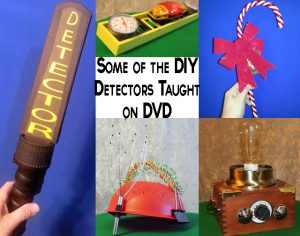 Ready to go immediately! It’s the easiest to use and most practical magic gag you’ve ever seen, Under the complete control of the performer at all times.

Included With Your Purchase!

NOW IT CAN BE DONE WITH ANYTHING! CLOSE-UP AND STROLLING! EXCELLENT FOR KID AND FAMILY AUDIENCES! Use it at any event where there’s a special guest being honored. It’s the perfect routine for roasts! Works for large crowds and small crowds! Use it at trade shows to prove how the competitions’ claims are lies! Close-up and walk around, it can be taken from table to table as you ask funny questions and perform your magic.

Robert Gives Away All His Comedy Tips On This Surefire Crowd Pleasing Routine!

MOST IMPORTANTLY: It comes with performance footage AND a file with pages and pages of Robert’s jokes, lines, questions, and suggestions for your ease of use. INCLUDING HOW TO CREATE YOUR OWN LIE DETECTORS! BEST OF ALL, YOU DON’T HAVE TO MEMORIZE THE QUESTIONS! PRINT THEM OUT AND PUT THEM ON A CLIPBOARD AND YOU CAN JUST READ THE ROUTINE AND TAKE THE CREDIT! It runs on 3 button batteries (included).

“A Great DVD and PDF that really brings your first rate prop into focus. This routine is going right into the act” -Famous Comedy Magician Nick Lewin

“After watching your DVD and seeing the comic possibilities of your routine, I built a steampunk lie detector for my shows on Cruise Ships” -Las Vegas Illusionsist Joseph Gabriel

Price $49.95 WITH SHIPPING INCLUDED IN THE UNITED STATES! You can’t get it cheaper anywhere else!

THE REVIEWS ARE IN! FIVE STARS ★★★★★ PEOPLE WHO BOUGHT IT LOVE IT!

“A great DVD and PDF that really brings your first rate prop into focus. This routine is going right into the act!”” – Famous Comedy Magician Nick Lewin

“Robert Baxt is not only a great magician, but he’s also a comic genius!” -Wayne Kawamoto, review for “LIAR” DVD & Gimmick on About.com.

“Recently I purchased from you your “Comical Comic Book” and “Lie Detector DVD & Gimmick” two great tricks as one can only expect from you. This week I had 8 Library shows and one family show and I used the lie detector in every one of them with great response. It’s getting laughter from each question asked of my victim. As soon as I turned the tables and it was me telling the little white lies, that brought the house down. For now, I am using the clipboard method but will try some of the others and will put my thinking cap on as to what I can make for my Halloween shows.” -Ray Franklyn, www.wickedtricks.com

“I live in Los Angeles and do lots of celebrity parties and I use Robert’s Lie Detector in every show. It’s great and that’s no lie!” -Rob Rasner, Hollywood, CA.

“I’ve been doing the Lie Detector at all my library shows this week and I am loving it! I just couldn’t ever come up with a good finish to the trick. So instead I use it as a running gag. I do it on every kid that comes up! They love it and after the first couple of kids, you can see the other kids get excited about having it done on them. Works perfectly in my spy show because I tell them I need to make sure they are not working for my evil enemy. The biggest laughs come from things they say and then your reaction to them. I’m getting really big laughs from the kids and adults.” -James Munton on FaceBook

“I use a lie detector in all my shows and your “LIAR” DVD has lots of good ideas and several lines that I will use. Thank you It’s more than worth it alone, just for the jokes and lines!” -Brock Edwards, Long Beach, CA.

“I have used my ‘Baxt Lie Detector’ in over 200 shows this year and I love it!” -Ralph Metzler, the official magician for the annual White House Easter Event in Washington, D.C.

“THANK YOU! It was the hit of my show in Dallas and is my new favorite part of the show. I can’t wait to use it again. -Debbie Leifer, Corporate Entertainer, Marietta, GA.

GUARANTEED TO BRING DOWN THE HOUSE AND THAT’S NO LIE!!

OUTSIDE THE UNITED STATES: Price $84.95 Includes Priority Shipping To ANYWHERE IN THE WORLD! (BUT! Order Select Other Items and get combined shipping for less! Email robert@robertbaxt.com with your full list to find out shipping).