Top Magician In LA – Entertainer – Actor – All Around Funny Guy!

“You were wonderful!”
-Kim Basinger

Along with being one of the top magicians in LA, Robert is also known for his writing abilities. He made the finals of the Walt Disney Company Fellowship for new writers! Robert Baxt writes jokes for many famous celebrities and comedians. 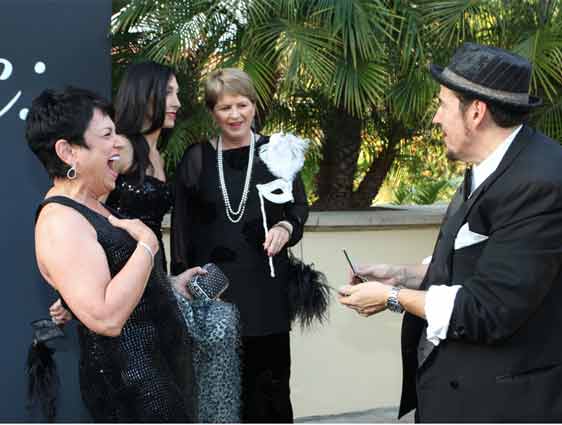 Robert Baxt can best be characterized by the description:

“If all the world’s a stage, he wants better lighting!”
A ham since his birth in Brooklyn, New York; even as a child Robert was off and entertaining with humor, balloon twisting, and comedy. When asked why he learned some magic tricks, Robert replied: “When I was a kid trying out my jokes on my family, my father would always ask me if I could disappear.” Robert is not only a local LA magician, but he also performs all around the world.

Comedy clubs, casinos, and college campuses not being enough, this gifted actor found himself making television appearances in South America, the Orient, Italy, Canada, and Spain; as well as numerous showcases on “America’s Funniest People” on ABC television, and on “THAT’S SO FUNNY” in syndication. As an actor, he can be seen in the eighth season of the CBS hit TV show “How I Met Your Mother” playing the lawyer partner to actor Jason Segel (Marshall), in the dramatic film “Even Money” that stars Danny Devito, Kim Basinger, Kelsey Grammer, and Ray Liotta; and in the French film “Parti Avec Le Vent”.

His parents not being able to afford to send him to driving school, let alone college, Robert worked his way through performing at children’s birthday parties, picnics, comedy clubs, and corporate events. Upon graduating with a Bachelor of Arts in Film and Theater, he was presented with the dual opportunities of being accepted to both Ringling Brothers Clown College and Law School. Without hesitation, our hero chose the one he felt would give him the better training for a life in comedy: Law School!

Attaining his juris doctorate degree from an accredited New York City law school, Robert realized that no one ever applauded an attorney after a hard day of cheating people. So forsaking a career in the hallowed halls of the judiciary, he turned to a full-time career in show business.

Los Angeles magician Robert Baxt is ready to make your next event unforgettable. With his unique sense of humor, Robert is always on the move. Whether he’s on stage, behind the camera, writing his next great work, on television, or just using his distinctive delivery for voice-overs, be on the watch for a funny guy: ROBERT BAXT!