They’re the basis for movies, TV shows, and tons of merchandise! And Robert has done it again with another routine straight out of his performing repertoire! A pack small, play BIG number that has audience interest AND mass appeal! No playing cards or ESP symbols because regular audience members don’t relate to them; but instead Super Hero Comic Books because of every movie, TV show, video game, and t-shirt that’s based on them! Here’s the set-up: The performer displays a prediction inside a large envelope before he begins. An attractive carrying case with handle is then shown and opened to display a variety of Comic Books. Jokes are made about different heroes and the spectator has absolutely free choices throughout the routine as the 6 vintage comic books are randomly eliminated, one by one until only a final comic book remains.

Wonder of wonders, miracle of miracles: The performers prediction is revealed to be a duplicate comic book that matches the selcted one! 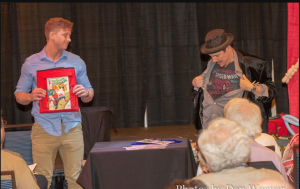